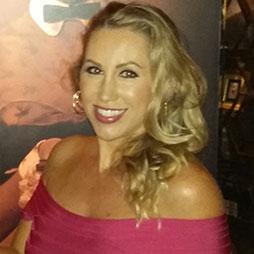 Samantha Rea is a London based journalist and former croupier. At the age of 18, she learned to deal roulette and blackjack at a private training school in East London. She then earnt her stripes as a trainee in a casino at the Marble Arch End of Edgeware Road, a mini-Middle East in the center of London.

Adding poker and baccarat to her repertoire, Samantha was cherry-picked to work in the company's flagship casino – an exclusive private members' club in Mayfair - where she dealt to an ultra high-net-worth clientele. After a decade in Mayfair, Samantha left land-based casinos – after squeezing in a stint as a Croupier Bunny at the newly opened Playboy Club London. Having picked up a BA (hons) in English and an MSc in Gender & the Media along the way, Samantha turned to journalism and soon found herself in Las Vegas as a reporter at the World Series of Poker.

Samantha has written about her time as a croupier for VICE, Londonist and The Spectator. She’s brought poker to the mainstream media, writing for Coach, Red Bulletin, Forever Sports and Las Vegas Sun – as well as interviewing icon Daniel Negreanu for the last ever issue of FHM.

Samantha’s celebrity interviews include Star Wars actor John Boyega, and she’s a regular at red carpet events such as the Empire Awards. Samantha’s real life features include an investigation into the sale of drugs online, and most notably, she has been credited with exposing the UK’s Sex for Rent scandal.

“The biggest risk is not taking any risk” says billionaire Facebook entrepreneur Mark Zuckerberg. It’s a sentiment probably shared by the British bad boys of gambling, whose famous faces have been seen at roulette tables across the globe. Sure, they might dip into blackjack - but for these celebrities, roulette is the ultimate casino game. Meet the famous roulette players born in Britain, winning all over the world.

How to Deal Roulette: Tips From PRO Roulette Dealers

“Dollies! Do your dealing!” In my early days as a Roulette croupier, a pit boss would declare this at the start of every day shift, before we let the punters in the door. It was always said with humour, but outside the gaming industry, the perception of croupiers as “dolly dealers” means the challenges of the job – and the skills needed to do it – go largely unrecognised.

How to Have Your Own Blackjack Party on St. Patrick's Day

So you could go to a pub for St. Patrick’s Day, but who really wants to stand on a sticky floor at O’Neill’s attempting to get served behind a sea of furry green top hats? And what can Waxy O’Connor’s offer, that you can’t get at home? A queue for a urinal that reeks of the piss of 500 other men? A wince-making wait for the ladies that concludes in a cubicle that won’t lock, wee all over the seat and loo roll all over the floor? I’d say you’re far better celebrating St. Patrick’s Day at home.

How to Become a Pro Blackjack Dealer

Once, when I was booked for a “fun casino” the other person due to work dropped out at the last minute, leaving the job a dealer short. A “fun casino” if you haven’t come across one, is a casino at a private event – usually a Christmas party – where the “customers” come to the table with fun money. No real cash changes hands, and there’s usually a bottle of bubbly for whoever wins the most chips. The casino dealers tend to be former croupiers who no longer work in casinos, although a few will be doing the job on their night off.

How People Try to Cheat While Playing Blackjack

“Have you ever caught anyone card counting?” As a croupier, working in London’s high end casinos, this was one of the questions I was asked most – often by people who’d never been to a casino, who wouldn’t even know how to play blackjack. The notoriety of this form of cheating is probably due at least in part to Ben Mazrich’s bestselling account of a group of card counting students who won millions in Vegas.